Until the end of the 15th century, fishing and shipbuilding were the main activities of the city. Nowadays, in this small port, it is the yachts of billionaires who mingle with the fishermen’s pointy boats !

In order to enjoy at best the charm of this small village with its narrow streets full of flowers and warm colors, crossing the gulf by boat will allow you to arrive quickly and directly at the old port.

In the year 68, Torpez (Nero’s steward) refused to abjure his Christian faith. He was tortured and killed in Pisa by the emperor.
His decapitated body was placed in a boat, thrown on the Arno. On board a rooster and a dog were supposed to devour him on board. When the Christians found the boat, the remains of the Holy Martyr had been abandoned by the two animals. They hid him and raised a chapel for him.
It was then that Torpez gave his name to Saint-Tropez.
The rooster, flying away with a sprig of linen, inspired the name of the nearby village of Cogolin (meaning “little rooster”). The dog, going to the bottom of the gulf, inspired that of Grimaud (which means “old dog”)!

For at least 3 hours, stroll through the norrow streets of this charming little village.

Stop at one of the harbour’s many terraces for coffee or ice cream.
Choose to stroll along the quays to admire the paintings of the painters as well as the sumptuous boats.

To be seen, to be visited : 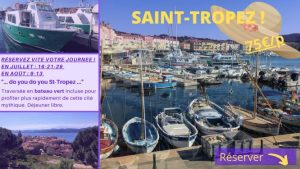 COVID-19 :
As the only driver of my vehicle I respect the health measures :
– Disinfection of the vehicle (seats, seat belts, handles…)
– Hydro-alcoholic gel is at your disposal